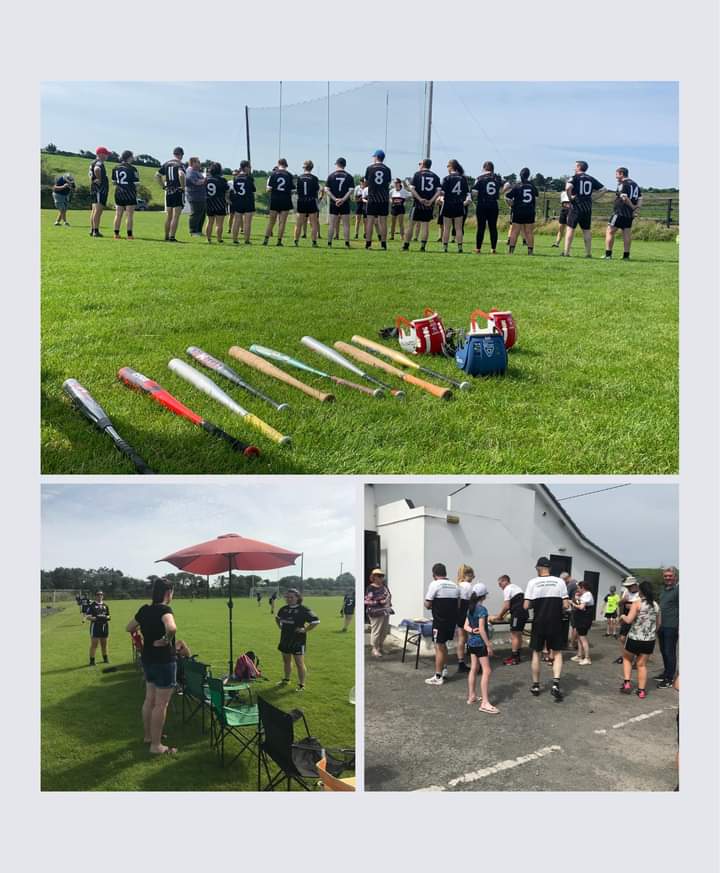 Royal Dunderry were on their travels this Sunday gone with two games in the depths of Mayo. Firstly, Kilmeena then a little further inland to Mayo Gaels.

KIlmeena is not hard to get to, it seems google maps likes to take you on the scenic route through Castlebar visiting all the side streets and seeing all the groovy little shops it has to offer. I feel I may have seen some of them twice. Whether it was the blistering 27c heat playing havoc on the satellite signal or perhaps it was the driver, I don’t know.

As you turn off the main road between Westport and Newport it is straight up to the grounds through a little village.  As you turn in you see the spectacular grounds of two pitches with near-perfect grass and the newish white buildings around the site.

Over the hill you can see Croagh Patrick overseeing procedures and its white top point lights up in harsh sunlight.

A man met and greeted us as we drove up to the back near the rounder's pitches, instantly making us feel welcome.  They have great facilities and it was nice to get inside if only for a few minutes into the cool air of the clubhouse.

After my extended tour of Castlebar we were running behind time.

For a Junior mixed game, the standard was very high. Both teams would be able to play in the intermediates with little issue.

Dunderry got three quick outs with only William managing to get home after a two-base fast run in the top of the first. A brilliant start for Dunderry. They come in for 2 in their first. The same in the second innings. Small scores you would see in a top-flight game.

In the third, Dunderry came a bit unstuck. A missed out on 2nd where the sliotar rolled over 2nd base with it just getting underneath the minder kind of summed up Dunderry. They were a bit unlucky.  They let in 5 runs allowing Kilmeena to come back at them. Dunderry zero reply in the batting put them behind by 4.

There were few walk-ons in the game, only 6 marked in total over the two teams. It was great rounders to watch as the pitcher made them good at a reasonable pace and the ball hit up for one of the outfielders to catch it and then put it into second. Most out were made on second. It was good for those watching as there was always some action.

In the fourth and fifth Kilmeena made 3 runs to keep ahead and extend their lead. Dunderry went out for zero in 4th with Kilmeena getting 3 very quick outs and then in the fifth a double out early on left them with Croagh Patrick sized mountain to climb.

For Dunderry, Racheal Flynn had a great game with a good few catchers and Michael OBrien was always on 2nd and got a good few outs.

For Kilmeena there was good play all over the field but LOF Daragh Richardson made some good catches.

The Player of the match has to go to Dunderry’s Michael O’Brien even though one got away underneath him.

After the game, they treated both sides to a BBQ and drinks which was very welcome after the game.  I can safely say they are great hosts and teams should look forward to the visit. As seaside venues go it is pretty close but doesn’t beat Easkey’s sea view and distance to the shore.

We all waited until the last minute and then made our way through Castlebar down to Mayo Gaels ground. A trip of only 32kms but 45 minutes through Castlebar. I think Google had planned on another scenic trip around Castlebar.

Can’t be fooled twice and I made it in 35 minutes.

Mayo Gaels is a fine ground, walled on 3 sides and great well-cut grass with bright white lines of a rounders pitch.

As I arrived at the pitch side at around 2.25pm, the heat was at its peak. The briefest of slight breezes made it bearable in parts.  Even the bottled water left in the sun could have made a fine cup of coffee by the end.

Dunderry’s first two batters went out quick.  Dunderry cracked on scoring 2 in the first innings with me believing this was going to be another close game.

The first person called from Mayo Gaels came into bat. She gave it an almighty hit and over the heads of the outfielders it went and three bases were achieved. We are in for another great game.

They were being held by great play from the shortstop Emma S. She was the first batter too. The talk and encouragement came from every player on Mayo Gaels. All egging each other on.

Dunderry had to put a stop to the run-scoring and did in the bottom of third with 3 quick outs. They just needed to come and score a good few to catch up and balance the performances. Mayo Gaels were two strong and with nothing cored top of the 4th then batted out for a 13 –11 loss.

Racheal and her dad Mick made a great team as pitcher and catcher with Anna playing a blinder as a catcher with one ball dropped all day.  A high ball into the sun doesn’t always get caught.

Mayo Gaels had a few good players with Emma getting player of the game, having someone with game experience in that position helps guide players to make the right choices.  Emma, PJ and Alan not getting out all match certainly helps. Direct throwing to second base led to most of the outs with people running from first when they didn’t need to leading to a double out in one case.

All in all a good day out. I answered loads of questions on the rules of the games to help the teams out.

We used a green sliotar in one of the matches. I saw no difference between colours in that bright sunlight, to be honest.

Traveling between games was unusual but understandable as Dunderry can do one trip and two games.  It also gave a break from the direct sunlight. Well done to all three teams. I really enjoyed both games.