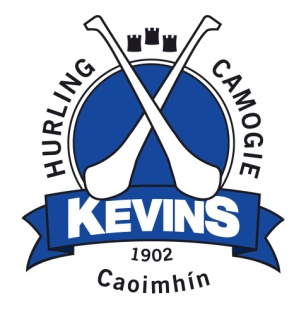 Club Notes Not Available yet

Kevin’s Hurling & Camogie were established in 1902 and primarily operate in the south inner city of Dublin. Playing pitches are located in Loreto Convent on the Crumlin Road in Dolphin’s Barn. All are welcome to join and we have active players who don’t live in the immediate catchment area.

GAA Rounders was started in the club as a result of a series of Healthy Club initiatives focussing on social games for retired players, parents and members of the local community. It was noted that there was a low up take from females on the Social Hurling and the club decided that as a hurling / camogie club that Social Rounders might be most suitable. We established Social Rounders as a trial in April 2019 and feedback was positive. After a few sessions we decided to play another club for the novelty. As there were so few clubs in Dublin the only option we had was to enter the annual GAA Rounders novice tournament. We ended up registering as a GAA Rounders club and decided to continue with Social Rounders in 2020. After receiving a few beating in the Junior All-Ireland and novice tournaments in 2019, we decided to enter the newly established Intermediate Mixed All-Ireland tournament were we lost one game, drew two and won one. We are now working with the other GAA Rounders clubs to develop a Social Rounders League in Dublin to encourage more people to play.

We now have over 30 register players made up of parents, retired players and new members from the local community. Our group is very diverse and includes players from the USA, India and Spain. We even have players from Mayo and Donegal who wouldn’t be regarded as hurling strongholds.

If you are interested in playing either socially or competitively please get in touch. We plan to enter a Mixed and Men’s team in the All-Ireland series next year. We are also recruiting for more ladies as we would love to enter the Ladies Intermediate All-Ireland series. If you just want to pop up and give it a go then that ok too and we have a social team if you are interested in trying that option.